(Or , depending on the version you buy)

Where Luke takes a look at the first new material from Rebellion using the IPC characters they bought as a job lot, and finding there’s quite a bit to love.

I have to express my ignorance of both comics. I don’t remember “Misty” at all. Lasting no more than two years it obviously left an impression. It’s highly regarded and fondly remembered by the rest of my generation. “Scream” came along 6 years later, but was strangled at birth – allegedly, it wasn’t liked by IPC management, so when a printers strike came along suspending publication, it gave the company an opportunity to hatch, match and dispatch it – destination “Eagle”, where it’s most popular strips continued.

You have a choice dear reader, either a Henry Flint cover, with the controversial prominence of Scream over Misty. Or, the Glenn Fabry cover with the reverse billing. 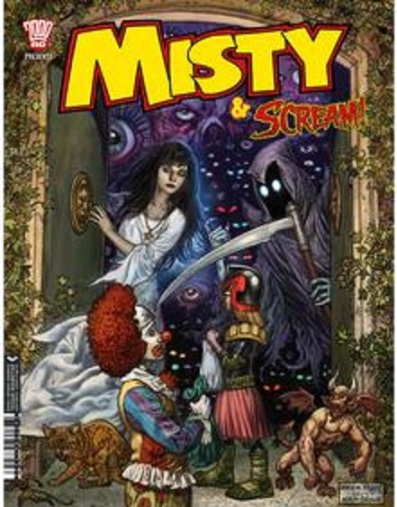 I prefer Flint’s – far creepier and more in keeping with the 80s comics it attempts to resurrect / honour. With all this newly purchased intellectual property in their portfolio, Rebellion want to see what will sell,what wll t=give them a return on their investment – or if your less cynical, resurrect much loved characters from your childhood (or in my and no doubt many others cases pre conception)   There was a similar attempt at this mannnnny mannnnny  ago with the “Action Special”  – that was a bit of fun, even with Mark Millar perving the “The Spider” up. However, here we are with round 2 of the resurrection reshuffle, 25 years later (1992).

“Scream / Misty”, “Misty  / Scream”  is packaged as if it were a regular issue of the comic(s). Lovingly presented with editor introductions, puzzles and pin ups. Considering that “Misty” lasted longer, it is a tad odd that “Scream” initially got the bigger billing. But then, it does have the greater proportion of the special. But, let’s not get into that. Enough has been said about it already. More to the point, is this any good?

Welllllll……….yeah. It is actually. I can’t get quite as enthusiastic as some of the others on the interweb, but yeah, it’s fun. It has a range of characters I recognise from the annuals I was given when I was a physically a kid (most men are blessed with an eternal mental and emotional childhood), but most the bulk of the strips are almost completely new to me.

“The Thirteenth Floor” revival kicks things off. Max is a tower block computer who occasionally judged residents or visitors, and sent them to the titular level where their nightmares become reality. Since its days starring in “Scream “and subsequently “The Eagle”, the tower has been damaged and Max and has been dormant. A young resident is attacked by a local gang, and while trying to escape our young hero inadvertently revives Max. Max sends the pursuers to “The Thirteenth Floor” to learn the error of their ways.

Artistically there is a split between the classic line work of John Stokes for the gritty grainy reality, whilst Frazer Irving takes over for lurid technicolour and surreal nightmare sequence. Good to see Guy Adams here, he’s growing into a bit of a favourite of mine. Good stuff.

“The Dracula Files” is up next. Monochrome art (with the odd, appropriate splash of red)from “Aliens” artist Tristan Jones, a member of the moody, gritty, he comes across as a combination of early Alex Ronald and Killian Plunkett.

Dracula has taken a new identity, but the protégé of his pursuer from the original strip is on to him. Grainne McEntee’s script builds nicely with some dramatic tension, but it’s a bit of a cop out anti climactic ending.

“Death Man”, by Feek (I’m guessing Keith Richardson – the editor of this very publication) and Henry Flint. DM had previously appeared in last year’s free comic book day prog’, and is the odd one out here as a new (ish) creation. “Death Man” is a servant of the Grim Reaper, but seeks to end his own life. Conversely, this strip reintroduces or references a slew of old IPC, kind of like “Zenith Phase III” (reprise).  Notably thrown in the mix is “Paddy McGinty’s Goat” – recently used by Pat Mills as an example of all that is wrong with British comics before the mid 70s comics revolution.

Two of the old IPC baddies Von Hoffman (of “Von Hoffman’s Invasion”)and the Dwarf team up to do something nefarious. Death Man teaming up with a host of old British comics heroes, is there to stop him. Flint is the quintessential 2000AD artist, and this is lovely work. Script wise, it’s a bit silly (in a good way) and like everything else here a taster for an ongoing series.

Ah, now we’re talking. “The Return of Black Max”. Somewhere in my attic there is a ”Lion” Annual or some such with a “Black Max” strip in it, I seem to remember some sort of ray gun mounted to Max’s Fokker Dr1, but his plan is foiled by some square jawed do gooder. Biplanes, castles, giant bats how can you not love that concept? Set in the modern era in this reboot. A young girl is having disturbing dreams of a red light bathed world and the sound of huge, beating wings. It turns out that this is limbo, where Black Max is trapped and the girl has the means to free him.

Simon Coleby delivers top drawer art here, although occasionally (deliberately?) indistinct, his style is perfect for this kind of psychological and physical horror, and Max himself is suitably gruesome and scary. Kek-W delivers an intriguing script, I’d read more of this.

“The Return of the Sentinels” has quite a dark premise. The Sentinels referred to twin tower blocks, one of which was a gateway to an alternative earth where the Nazis’ had won the Second World War. We’re re-introduced to the strip by a young girl and her friend breaking into the “gateway” tower, and finding themselves in the alternate dark side of Britain.

Lots has happened since the “Misty” days and the strip has a bit more freedom in how to express the nature of this fascist state Nazi state. I’ve never come across Hannah Berry before, but this is well scripted, and frankly beautifully drawn by Ben Willsher.

“Return of the Fairy Hunter” is the one dud in the pack. Patricia Milson is a fairy hunter turned author. Her put upon assistant is approached by a fairy with a plan for revenge on her boss, but it doesn’t go according to plan. It’s a bit slight, but nice art from Dani and a decent enough script from Alec Worley, but it feels a bit of an after thought.

It’s a good package, but it would have been nice to see credits to the original “Scream”, “Misty” and “Thunder” creator details. It’s a good stab at tapping into the nostalgia market, but perhaps that itself could be a problem. Should they be relying on old properties, “reissue, repackage, repackage”? Or should they be looking to create new properties, enticing creators with better rights and pay rates ? Regardless, I’m glad I picked it up. Even though it’s from the same stable (“hatch match and dispatch”?), 2000AD could do with some newsstand competition. Hopefully it’ll lead to a regular run.