The Law In Order: Mutie The Pig

It’s a funny old life being a Judge. You spend 23 hours a day on the streets, ten minutes in a sleep machine, a further ten in the loo and the remaining forty minutes being sexually gratified by a house robot. Judge Gibson has rebelled against all that and splits his time evenly between crime and mullet upkeep. This is his story… 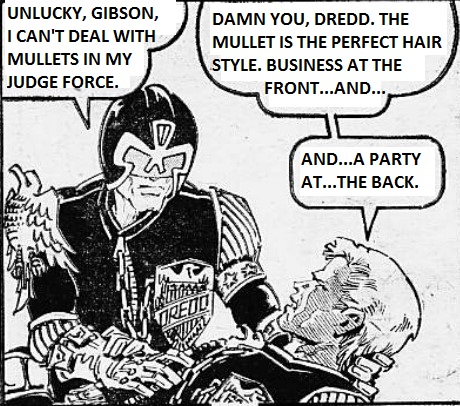 WHO’S RESPONSIBLE?:
John Wagner tries to best the back story of Pat Mills and Mick McMahon is shown up by Ian Gibson again.

WHAT’S IT ALL ABOUT (IN ONE SENTENCE)?:
A series of robberies leads Dredd to suspect his old friend, Judge Gibson, has turned to crime.

WHO’S THAT IN THE HELMET?:
Judge Cicero is in hospital.
Judge Peace is on a goodwill visit to Texas City.
Judge Gibson, a class of 2079 graduate, is a bent Judge, conducting robberies as Mutie The Pig.
Chief Judge Clarence Goodman leads the funeral procession, deceiving the populace.
Principal Jurgen Griffin (not named) agrees to let Gibson and Dredd duke it out since it will give his Cadets the opportunity of seeing a man die. He’s most likely sporting a massive erection throughout the combat.

ANY LAW LORE?:
Dredd personally paints out Gibson’s name from the Honour Roll which is a very low tech solution to the issue.
Joe Dredd was nicknamed Old Stoneyface at the Academy, which prompts the question: what was Rico called since they were identical. My guess is “Sugartits”.
The head of the Justice Department is now called the Chief Judge.
Only three left handed Judges support their gun hand under their free arm.
Arguments are settled at the Academy via Cadet’s Rights which seems to involve a boxing glove and a weird spring.

ANY TEETHING TROUBLES?:
Maria is back to being Dredd’s landlady instead of his housekeeper.
Dredd calls MAC “Mack”.

WHAT THE DROKK?:
Dredd gets a state funeral with 200 Justice Department vehicles painted black as all of the city comes to believe he is dead, which is highly elaborate and expensive considering the whole thing is a ruse. Wouldn’t it have been cheaper to just arrest Gibson and then hand him over to the SJS based on the evidence? Surely they could beat it out of him in a few hours and then find his stash of ill gotten gains.
For the first time in 80 years the city’s weather controls are set to winter, implying that the city (and weather control) has existed since 2019. They’d better get cracking on that.
Since Dredd had already figured out it was Gibson, why did he need to catch him in the act?
Gibson is all too conveniently watching Dredd while he is investigating the footage, and luckily has a rifle ready to kill him.
Dredd is lying face down after the bullet misses, yet can still see it is Gibson who has taken a shot at him. Does he have eyes in the back of his head?
Gibson is a bent Judge, a murderer and a thief and yet Dredd allows him to invoke Cadet’s Rights out of “friendship”. Fuck that!

WHAT’S THE ART LIKE?:
The change in artist jars a little but both parts are equally brilliant with a genuine touch of horror, surprise and pathos.

HOW MANY LINKS?:
Plot holes aside this is great stuff and like the Rico story it gives some much needed depth to Dredd’s background and the nature of the life of a Judge. Once again Dredd is denied a friend by his own hand and once again he must take out one who has turned to crime. Five links.