The Law In Order: The Ape Gang

Talking apes have been the whipping boys of sci-fi for ages so it’s no wonder they have rebelled and turned to crime. 2000AD deftly explored this for a young audience in 1977 and forever ingrained a distrust of the noble simian in our juvenile minds. I just bet that the person who shot Harambe was a lapsed reader of the Galaxy’s Greatest … 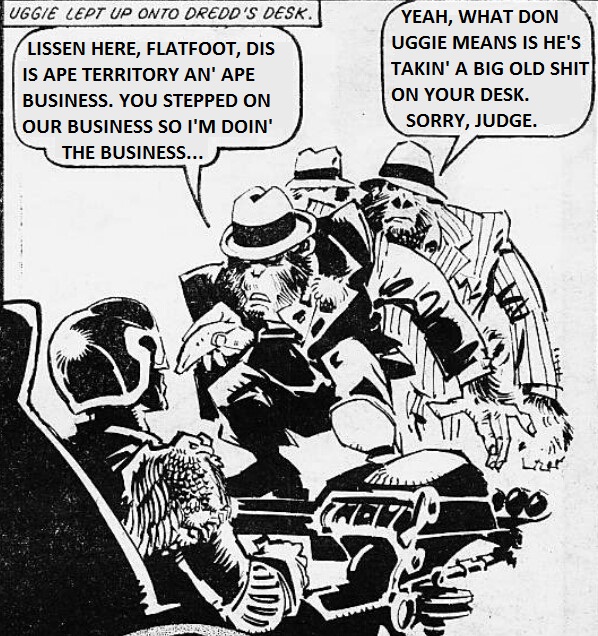 WHAT’S IT ALL ABOUT (IN ONE SENTENCE)?:
Dredd decides to crack down on an Ape Gang war that is threatening to escalate.

ANY LAW LORE?:
The Animal Nuisance Act 1987 states “Any animal creating danger to human life must be kept in a secure place”. Sadly this doesn’t apply to Danny Dyer.
Dredd has a private office at Justice Central.

WHAT THE DROKK?:
Fast Eeek is named Fast Eeeek according to Dredd.
There’s quite a stretch here since brains aside, apes don’t have the vocal chords to approximate anything close to human speech. Gorilla sex lines are just a series of grunts. Mind you, so are Geordie ones.
Unlike Star Trek’s “A Piece Of The Action” there’s no good reason why the apes would mimic 1920s gangster styles.
Bizarrely the same rule of law doesn’t seem to apply to apes, even though they are citizens of the Big Meg.

WHAT’S THE ART LIKE?:
McMahon lets loose and pulls off some excellent architecture of The Jungle as well as the look and feel of the apes in their finery.

HOW MANY LINKS?:
For the fun value alone it rates a good four links. Look too far and you could argue that there is some anti-Italian sentiment with the apes taking the place of the second-generation immigrants and getting into organised crime. We’re just lucky it wasn’t about the Taffia.