The Law In Order: Sob Story

Ugliness. For some, myself included, it’s a constant companion that greets us every morning in the bathroom mirror. Sure, you can still make a living by selling your image to use on planned parenthood pamphlets or getting a regular gig as host of Masterchef UK, but what if you are so utterly grotesque as to warrant an outpouring of actual hatred? Here’s Judge Dredd to investigate… 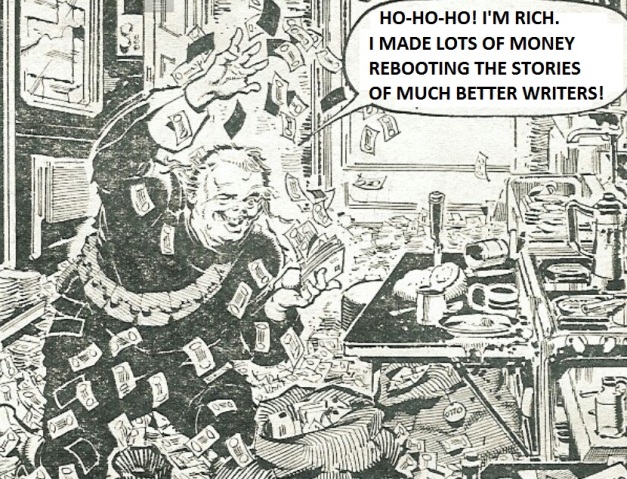 WHO’S RESPONSIBLE?:
John Wagner picks up his game and Ron Smith dips into his pencil case and pulls out the fugly crayon.

WHAT’S IT ALL ABOUT (IN ONE SENTENCE)?:
In order to catch perps who rob and kill Sob Story winners, Dredd baits the trap with terminal hard luck case Otto Sump while deciding to come out of the closet.

WHO’S THAT IN THE HELMET?:
Chief Judge Jurgen Griffin is nearly in tears when listening to Sump’s sob story.

ANY LAW LORE?:
Judge only ramps exist on some roadways.

IT’S CULTURAL, INNIT?:
“Didn’t she sob well” seems to be a nod to Bruce Forsyth.
Rudolph Valentino was of course the silent movie star whose death caused a spate of suicides.

CANON FODDER?:
One of the Mopads has a sign advertising a swap for 2 tickets to Mega City 3 (instead of Texas City).

WHAT THE DROKK?:
The skeleton of one victim is seen floating in a pool. Skeletons don’t float.
Otto gets poison and a gun sent through the mail to him. Doesn’t the Justice Department screen what goes through the mail?

WHAT’S THE ART LIKE?:
Smith does well here pulling off the quite unnecessarily ugly Sump. Not literally, that would be traumatic.

HOW MANY LINKS?:
It’s funny, well-paced and accurately predicts the rise of the TV reality show catapulting the untalented or the flagrantly hideous into positions of power and influence. We’re also seeing the flaws of the big city with housing being a real issue. What they need is a war to thin out the herd. Five links.