Luke & partner in crime head across the Severn Bridge to geek out for the day and empty their bank accounts at a convention that is tailor made.

This is only my second 2000AD themed convention, though there is hardly a surfeit of them. My first was last year’s “Thrillpower 40 years of 2000AD” (covered by your truly  here) perhaps not coincidentally there was no “Lawgiver”. What’s important to note, is that although it’s called “Lawgiver”, it’s not exclusively Dredd, nor is it an official Rebellion / 2000AD event. In fact as far as I could tell (someone will correct me no doubt if I am wrong) that there were no Rebellion or 2000AD staff present, at least officially. I always feel a bit short changed by the larger “comic” cons, which very often don’t have a cursory relationship with comics and are more “genre” cons, more about the films and spin offs and characters that originated in comics. This is all about 2000AD, which is the way I like it.

I have no idea why I hadn’t attended the past 3 Lawgivers, particularly as Bristol is close to everywhere in Wales (I’m from Llanelli)- everyone knows that, so I bought tickets for me and my mate Richard. Our wives hitched a lift to the city centre whilst we geeked out. Middle age brings male pattern baldness and spread, but if you are lucky  – disposable income (especially if you don’t spend it on trivial things like the house, car and kids).

I remember being told by a more senior colleague in work that “prior Preparation Prevents Piss Poor Performance”,something that I have failed to live by, being more of your seat of the pants kind of guy, I thought that “I know Bristol. How hard can it be to find the venue?”. One large slice of humble pie and consulting Google maps later we arrive, dispatching spouses to a day of cocktails, Richard and I trudge to the venue, book in and orientate ourselves. We are greeted by Judges, Sov, Brit Cit (including Judge Inspector Strange – a favourite) and MC1 (both film and comic version)  Durham Red and a guy dressed as the waiter carrying the synthetti man from the JD “Mega Rackets” strip  from Prog 216. It’s probably one of the most original cosplays I’ve come across, though I would imagine carrying that costume around all day was going to get tiring. He even created business cards. Genius. 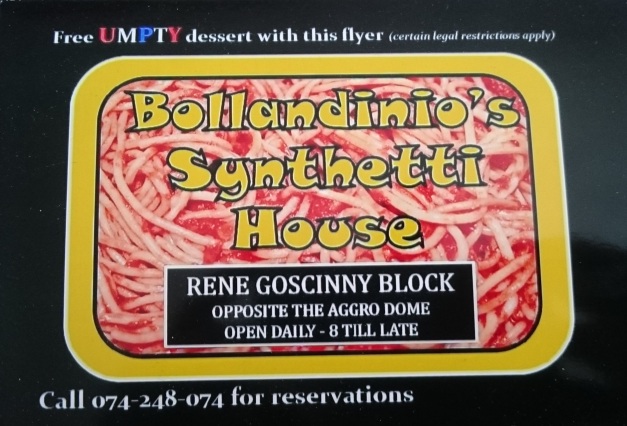 Finding our bearings we head into the first room. Rich’ catches sight of the Planet Replicas stand. He has money and permission to purchase from wifey. I’ve got the permission (“it’s your money love”), but not necessarily the cash – but I can’t come away from the con’ with nothing, it just wouldn’t be right. I decide to wait, it’s art I’m after, but we both feels like kids in a sweet shop

The model of the Lawgiver mark 1 catches Rich’s eye. My tastes are little less ambitious – I’ve already got  some 2000ad cufflinks, but justice department themed ones would definitely top off my suit when I’m representing the department for work – how couldn’t they? And, hey, if I’m going to spend money – I may as well throw in the Dark Judges badge set (the little ones, not the shields). Rich’ is of a similar mind, if you are going to spend – you may as well go big. He gets the McMahon Dredd statute as well. The range of stuff that Planet Replicas is developing is impressive. If only I had

It isn’t the first time I have seen them, but the Judge Minty costumes and the SD fan film props and costumes never fail to impress. I pass up the invitation to try one on. I might have been tempted with Wulf’s Happy Stick though. 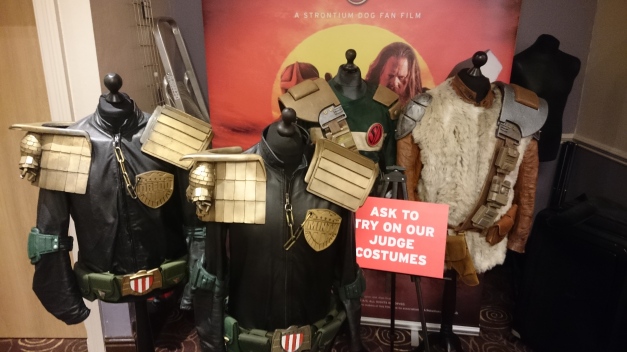 We head into part of the hotel redesignated as “The Interrogation Room” for the  introductions for the day. I start to spot faces, there’s Ian Gibson, members of of Facebook groups. A distinctly female looking Marshal Law walks in, followed by Dirty Frank and Aimee Nixon. It all add to the atmosphere of the convention. The first interview/panel begins shortly afterward and  Rich and I lurk behind waiting for it to begin. This first panel stars Simon Bisley and Glenn Fabry. Bisley comes in first, he’s a big bloke, affable and jokey, hinting on heavy night last night, he informs the crowd that Fabry lost his shoes and glasses. Fabry comes in not long after, feet safely shod and bespectacled, but perhaps looking a little worse for wear. If Bisley was hungover, he didn’t look it, and bounds to the stagelike a hulking labrador, bellowing “satan” into the mics. It takes a bit of time for the interview to warm up, but their candidness is refreshing, both are enthusiastic and passionate about their work and pepper their interview with some blunt opinions and some potentially slanderous stories about 2000AD editorial. Bisley is still beavering away on the Joe Pineapple sseries, to be published ” sometime next year”.  Fabry said he was working on a project  with the director Duncan Jones,which might be “Mute” as first reported back on 2013. and regaled us with a very funny story about his encounter with Dominic Cooper who plays Jesse Custer in the TV adaptation of “Preacher”.

Panel over, there is a bit of time before the next one, so we tables. Me being me I end up dithering along artists stalls, where to start? Who to speak to? Having got over my previous tongue tiedness. Peter Doherty – a favourite 2000AD artist is available,  and he has art for sale. We have a quick chat, I ponder on buying a sketch from him. Immediately to Peter’s right is Patrick Goddard, beyond him is  a line of “Slaine” artists Glenn Fabry, Simon Bisley and Clint Langley and at the end Henry Flint. To Peter’s left  are Dylan Teague and  David Roach. I’ve been lucky and met most of these guys already, so really I wan to hunt out the chaps I haven’t got art from,or haven’t met.

Across the other side of the room, Mick McMahon and Ian Gibson are signing and chatting happily to fans, John Higgins is round the corner from Ian. Ian has a long queue, he’s not sketching,but he is signing. Mick is on the other side of the room from the line of artists, alongside the fourth “Slaine” artist Mike Collins. There is one guy at Mick’s table. Now’s my chance, I’d like to have a Mick sketch, he’s gracious when I ask, but says he’s got to go to a panel / interview. Is that the time already? Rich’ and I head back to the “Interrogation Room” for the Mick McMahon / Ian Gibson interview, but not before Rich’ get’s Mick to sign the box of his McMahon statue.

Mick is reserved and self deprecating, but warm and funny. Both artists have a slew of anecdotes, fascinating reminisces  of their work on the prog’ (am I the only one who didn’tnotice there were four versions of “Call Me Kenneth”?). It turns out Ian is a bit of a potty mouth. His anecdotes and frank opinions have the audience roaring with laughter, he’s  not afraid to speak his mind, or to share opinions on his fellow creators, collaborators and editorial (both UK and US).  He’s a thoroughly entertaining interviewee (2017 ECBT interview), but no way am I repeating some of the things he said, here.

Back to the floor, Rich’ and I enter the one room we had yet to visit, with more way sof spending our hard (?) earned.  For me it’s a goldmine. absolutely hundreds of pages of art for sale, including a Bryan Talbot “Nemesis the Warlock” page, Carlos “Strontium Dogs”, stacks of Ian Gibson sketches and pages, a Fabry “Slaine : Tomb of Terror” page, Nigel Dobbyn, Colin MacNeil (“Dredd”, “Defoe”, “Strange & Darke”), Simon Harrison and more.  We leave, to catch the next panel, on the way out I notice that someone has started making “Blitzspear” kits, urgh, more money.  Richard tempts me, but I resist. I’d just make a mess of it anyway.

Panel 3 for us is in the “Hall of Justice” “Megacity – Mega Tech! A Discussion On the Uses of Technology in Art”, starring (?) Lee Carter, Ryan Brown and Clint Langley. It sounds a dry subject, but the panel became more of a discussion on the perception of the validity of digital art, with the panellists arguing that it was just another tool, and the potential threat they saw to artistic individuality. Absolutely fascinating.

I head back Ian Gibson’s page to thank him for a commission he did for my wife for my 40th a few years ago, then onto Mick McMahon’s table. As befits his status, the queue is now far longer,  frustratingly so.

After half an hour, it hasn’t moved. “Bugger this” says I, and head back to Dale Jackson’s  art table. I plump for an “Ace Trucking” page. Dale  – take my money. By now my wife has arrived in the bar. Beaming, I leave the page with her and head back to the artists room.

I dither around by Peter Doherty’s table again, but try my luck with Mick again and get  a sketch. Ahhhhhh. My work here is done. But wait, Mike Collins has some “Axel Pressbutton” art. But that’ll have to be for another day.

During the day, I finally got to put faces to names, the guys from the 1977-2000AD Facebook Group, Eamonn Clarke from the Mega City Book Club Podcast.  My time management at these events is lousy, here were loads of people who I didn’t get around to speaking to, including members of this parish. But also the newly constructed droids, Dan Cornwall(“Rok Of The Reds” is great fun)  Steve Austin and Paul Williams. I was beaten by indecision and impatience, but that is no reflection on the con’ itself.  As a con’ it was friendly, professionally run and well balanced. The last time I felt such a buzz from a con’ was at “Thrillpower” last year. I came away with a warm fuzzy feeling and I hadn’t even been drinking (designated driver).

This was my first “Lawgiver”, but not my last. All credit to the organisers, this is my new favourite convention. Here’s to next year.