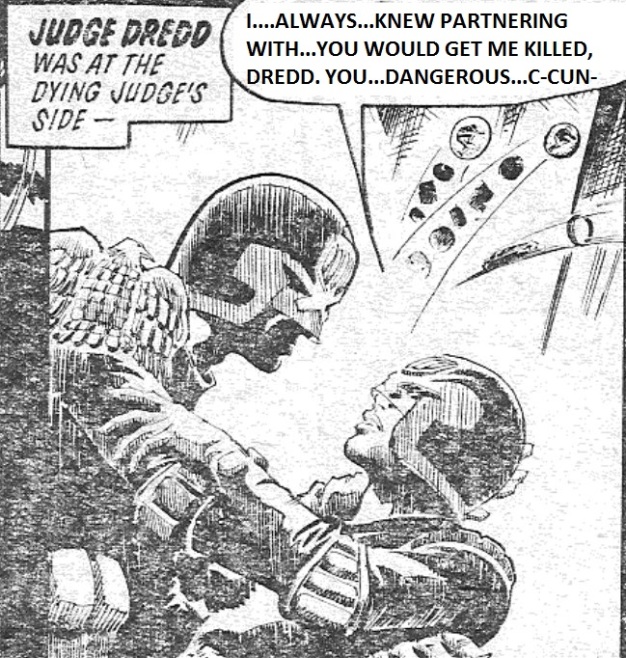 Orlok has never been zorbing as it sounds like a prime opportunity to vomit extensively in a confined space. However, Boinging sounds like a good laugh, except for the fact that stopping the bastard would be a real issue. Luckily, nobody has the smarts and the insanity to try and invent such a thing. It’s only a matter of time, isn’t it?

WHO’S RESPONSIBLE?:
John Wagner has another craze tale and Barry Mitchell does a sound job.

WHAT’S IT ALL ABOUT (IN ONE SENTENCE)?:
Boingers cause havoc in the city.

WHO’S THAT IN THE HELMET?:
Judge Parker is killed by illegal Boingers.
Judge Bridle is based on the wall, so you wonder just how he fucked up his career.

ANY LAW LORE?:
Boinging in the city in illegal.
After 15 deaths, the first Boing law is passed; a mandatory 20 year penalty for improper use.

IT’S CULTURAL, INNIT?:
Though we’re a little way off from Boing, Wagner successfully predicted Zorbing which was first brought to public attention in NZ.

CANON FODDER?:
The term Mutieland is once again used to describe the Cursed Earth.

WHAT THE DROKK?:
The perp’s father tries to bribe his way into Dredd’s favour by offering to donate to a “Judge’s Fund”. There’s a Judges Fund?
Boing is airtight (as shown by it being used to trap the Dark Judges) so how do Boingers breathe while inside?

WHAT’S THE ART LIKE?:
Better than the last time Mitchell did it, and the panel of the Boinger being worshipped by mutants is really nice.

HOW MANY LINKS?:
This is one of the standard crazy invention goes awry/causes chaos/requires new law tales that will come to be a staple of the strip. Three links but only for the hilarious line of two boys saying “we gotta do the big boing too! Let’s spray each other.” Play safe, boys- use a condom.