Alas, that’s the end of the 3A range of 2000AD Action Figures (or as Luke’s other half insists, dolls) . Luke spends his hard earned and gets a second hand example of the 1/6 figure, having already forked out loads for Mongrol, Sam Slade, the Dark Judges, Gronk, Fish but thankfully was given Ro Jaws. Arguably this is the one 3A should have started with first, Luke ponies up the dough for “maxi” Dredd. Is it any good?

Well it was nice while it lasted. I would have hoped that they would have at least finished the Dark Judges for Cliff’s sake, even if they couldn’t have done any more than 2 ABC Warriors. I may have been alone in this, but I was quite excited at the prospect of a “Satanus” figure, and their Johnny Alpha previewed at the 40th celebration last year  looked awesome, I would have beaten my way to the front of the queue for that. But, there just weren’t enough of us profligate man children around to sustain the line. There is always Mezco, but nah, they wouldn’t match the others I have.

I resisted the temptation of buying this for such a long time, but decided that, you know what, what I REALLY need to make my life complete is an “Action Man” scaled doll of the 1/12 Judge Dredd figure I already possess. And, no I don’t care how much it costs, just give it to me now as I don’t have enough clutter in my house. Also, I am curious as at what point my wife starts gathering all my 2000AD paraphernalia in a pile and breaks it apart by hand whilst whimpering and rocking back and fore on a dining room chair. Happily, we haven’t reached that point yet, but I am beginning to smuggle pages of original art into the house.

Having cleared the Paypal account in acquiring said item, I built up high expectations. It was going to change my life, I will stare at it lovingly for hours on end, I will build a SHRINE to it. When it actually arrived, I had that familiar anticlimactic feeling which you always get when you seem to be waiting an age for something (for me, 7 days. If you paid before release I dread to think how long you waited).

Not to say that it isn’t good quality – it is, it’s excellent. The sculpt is fantastic, they’ve spent a lot of time replicating the uniform (6 links 😦 ), the weapons and most importantly, the grimace. 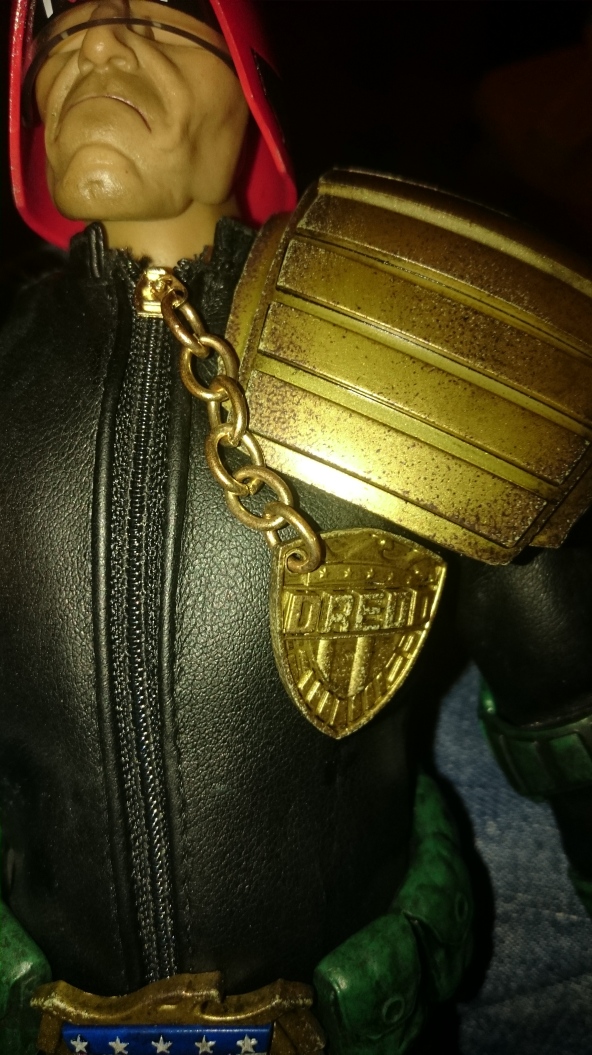 This is Joe, there is  no doubt. The articulation is terrific, Joe can strike a pose, or if you have kids teen and up they can (and will) put him in any number of  compromising positions. Particularly with that daystick. And that zip works, if that floats your boat….

It is wonderfully detailed, and the uniform is good quality, faux leather something or other. 4 pairs of hands available depending on what you want him to hold; two chins, for “grim” Dredd, or “snarly” Dredd. He’s properly tooled up too, he comes with the aforementioned daystick, Lawgivers mark 1 and mark 2 and the Widowmaker shotgun as introduced during “Judgement Day”. The magazines on the guns detach which is a nice touch, or, to put it another way, a complete pain in the arse as you are likely to lose them. It could go either way. I still curse 3A over the cigar they supplied with their Robo-Hunter figure.

With the reactions of a geriatric sloth I bought the 2nd, more expensive, one I saw on eBay. I dismissed the “Apocalypse War”  variant that was up for auction thinking that it would go for a price out of my budget. It sold for £60 less than I paid for the one now in my possession.  <sigh>

Anyway – is it any good?

Yes, completely. It’s great. I have no idea where I’m going to put him, particularly as my house is now full of “boomerang kids” and I’ve had the customary discussion with my wife over its status (“doll”, tut – what does she know?).

Criticisms? A few. I’m always afraid of manipulating the 3A figures too much (which can’t sound anything but wrong) as I think they feel quite fragile. Or maybe it’s because of how much they cost? I don’t know. Specific problems are that there is sharp intake of breath from me when I’m de and re chinning him (not a regular occurrence), and that his left shoulder pad (not the “rubber eagle”) comes away too easily and is a bugger to refit. I’m not the most dexterous, and fine motor control is beyond me. I have two settings, gossamer gentle or ham fisted, nothing in between.

If you have the thick end of £200 going spare , you could do worse. Or better yet,  paying for hypnosis to prevent you buying any more expensive tat.