Welcome to post Brexit Britain where food hoarding and black marketeering is the new norm. When the shelves ran dry and the pets disappeared, only the most ruthless or cunning had survived. Now holed up in his Cellar Of Bread, Toecutter Burdis rules the Cunt Kentryside with a gauntlet of iron. Meanwhile, in the ruins on the North East (which to be fair is no different to as it was before) Pete Humungus is down to his last steak bake. War is imminent. 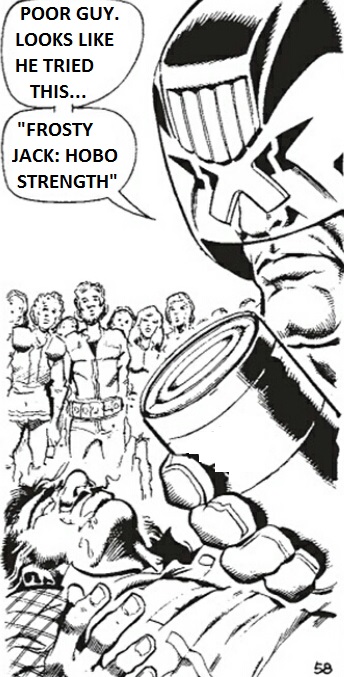 WHO’S RESPONSIBLE?:
John Wagner and Alan Grant continue to explore the aftermath and Ron Smith gets his cans out.

WHAT’S IT ALL ABOUT (IN ONE SENTENCE)?:
A black marketer gets his comeuppance.

WHAT’S THE ART LIKE?:
Is it me or is that Barack Obama in the last panel. Somewhere, Steven Ross is connecting the dots.

HOW MANY LINKS?:
Three.