Remember the 90s? When everyone gritted their teeth, was super muscley to carry all the guns they had and doors had to be extra wide to accommodate their extreme body shape and the veritable armoury hanging off their torso and every limb ?

Luke does too. He also remembers when British superscribe and Dredd co creator John Wagner dipped his toe into DC Universe based vigilantism, that didn’t involve a bat (well, not much anyway), but did involve guns. Lots of them.

As part of an irregular series of looks at 2000AD related strips, Luke takes a look at Wagner and Dave Johnson’s curio “Chain Gang War”.

John Wagner hasn’t really done a lot of work for America. He wasn’t drawn to superhero comics in the way his former writing buddy Alan Grant (and avowed flying rat fan) was and they are still the predominant genre in the US. But John does like his grim and gritty comics, and within the confines of the DC universe, not much comes grittier than this series.

Chain Gang War deals with the a trio of affronted, arguably public spirited individuals. A rich dude, Yale Strang, an ex marine, Ernie Dorrs and ex con’ nut Curtis Zecker, motivated by a mix of revenge, justice and outrage seeking to clean the streets of a gang riven city.

The difference is that they don’t have the backing of the police, they don’t have special powers, they don’t have membership of some internationally recognised superpowered group. But courtesy of Yale, they DO have a lot of money behind them, and their own makeshift prison “The House Of Correction”

Gangs are attacked and set against each other as their are leaders kidnapped, blaming each other for starting a turf war, until it become clear that there is are new players in town.

The mob bosses are kept under lock and key in the House of Correction by Yale’s caretaker, Loopy, known as “The Warden”. But it all starts to unravel when Deathstroke, the DC universe’s answer to the “Punisher” is hired to take rescue one of the prisoners. Deathstroke finds he has a connection to Ernie, having served in Vietnam with him and witnessing a tragic incident that has haunted him ever since Deathstroke’s sense of justice means that he now has a new target in Ernie. 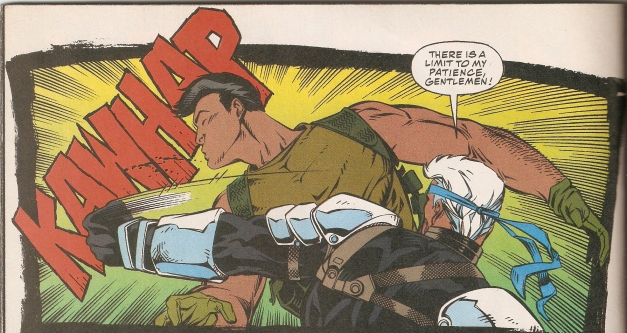 In the meantime, the fragile discipline of the group begins to fragment. Yale and Curtis both get over eager , Curtis is badly wounded and needs medical attention and Yale draws far too much attention to the group, jeopardising “the mission”.

Neutralising and imprisoning Deathstroke, the group trace organised crime activity back to one man, JJ Crook. The so called “Crooked man”, a deformed ex lawyer who runs crime in their city, and has cops and politicians in his pocket through a combination of blackmail, intimidation and bribery

Along the way that period Batman turns up i.e. Azrael / Jean Paul Valley, aka AZBats, who had replaced Bruce Wayne in the cowl in that decades temporary crisis for the never ending franchisszzzze. IronPunisherBat mainly observes watching the Chain Gang’s progress until the end of the series, when he finally gets his hands dirty.

Aside from the sales boosting appearance of Slade Wilson (Deathstroke for non DC heads), this is a Wagner slow build. Some plot element are recognisable from his other work, borrowed from or also used in “Judge Dredd”, “A History of Violence” and “Button Man”. Firmly based within the DC Universe, this isn’t gritty as those works, particularly when you consider the outlandish enemies that arrive later in the run that Wagner and Johnsons’ joint imagination spawned, most notable the Crooked Man and his henchmen.

As the series progresses, it gathers pace, and as cancellation looms, Wagner’s carefully laid out plans for the series become truncated, interesting supporting characters are overlooked and sidelined. But at least the series ends properly, without characters acting strangely, or the deployment of deus ex machinas left right and centre to wrap up plot lines prematurely and unsatisfactorily.

It is a shame that Wagner and Johnson had to use “tent pole” characters to attract readership, it distracts from what is otherwise a compelling story of doomed and ill thought out vigilantism. The characters are empathic and this being Wagner, he’s not precious about offing characters (apart from the Franchise Monsters, obviously).

This is some of Dave Johnson’s earliest work, it’s not distinctive as his later work, but you can see the exemplary sense of page and cover design that signifies his work.

There are a few fill in artists, most notably Gary Erskine, who as usual gives everyone a broken nose, but is a good replacement. Moe than can be said for the other fill in, Federico Cueva who sadly lets the side down .

Wagner being Wagner, this ended with no plausible way of resurrecting it,To be honest considering who was writing it, this was never going to end well, but it would have been good to see this develop more, and eschew the guest stars. I think it was Wagner’s last long form work for DC and American comics in general. Perhaps this would have been better served under the “Vertigo”imprint , but this was the period before Vertigo had really begun to go beyond horror and fantasy (“Sandman Mystery Theatre” notwithstanding) and “100 Bullets” was still a few years away. Outside the confines of the DC Universe, with more freedom, this may have really flown.

Back issues can be picked up fairly cheaply for what is now a 25 year old comic. Whilst not essential, it’s a great read and its an interesting period for one of the greatest writers in comics and to see the beginning of the career of one of the most stylish artists.