The Law In Order: The Suspect

Sometimes it is hard to be a normal cit in the Big Meg. Keeping your head down as one out of touch leader is replaced with another is one thing but wanting a better life given the crippling financial situation is another. Unless you have the option to flee to somewhere more inviting like Oz or East Meg 2, you are going to have to either suck it up or hope that a revolution is on the cards. Wait, did I say “Big Meg”? Shit, I meant “Brexit Britain”. 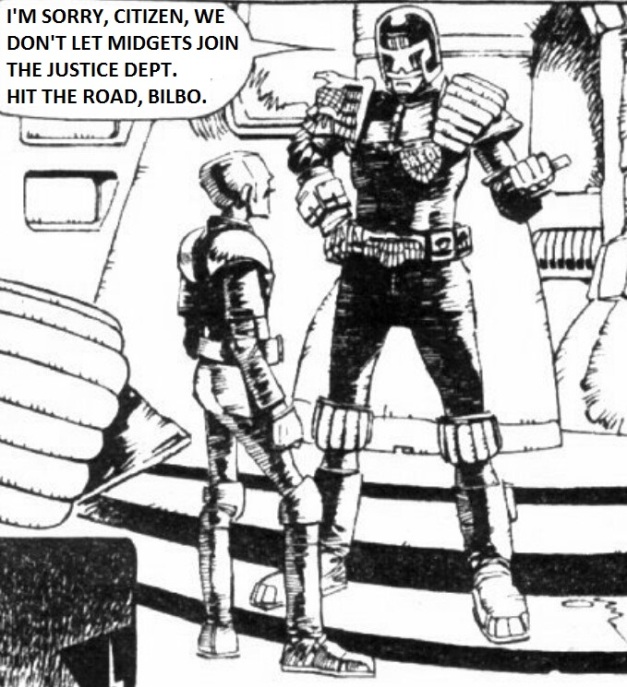 WHO’S RESPONSIBLE?:
John Wagner and Alan Grant show us a slice of citizenry while Cam Kennedy dials up the tension.

WHAT’S IT ALL ABOUT (IN ONE SENTENCE)?:
A citizen is pulled in for interrogation.

WHO’S THAT IN THE HELMET?:
Judge Ewins is a desk Judge at the I-Cubes who directs Wenders to sit the fuck down.

IT’S CULTURAL, INNIT?:
Ken Kercheval refers to the an American actor, best known for his role as Cliff Barnes on the soap Dallas.

ANY LAW LORE?:
With unemployment getting back up to 87%, holding down more than one job is illegal.
Wenders seems to know his rights stating he doesn’t have to say anything and they can’t make him. This seems a little inconsistent with other stories.

WHAT THE DROKK?:
Dredd takes a mate along to arrest Wenders- why? He’s half his size and unlikely to put up a fight.

WHAT’S THE ART LIKE?:
Well, there is a circle panel and some decent art from Kennedy who throws in a claustrophobic feel to interrogation room panels.

HOW MANY LINKS?:
Though this doesn’t quite deliver on the tension or add much more to the aura of fear the Judges have with their interrogation cubes, it does speak to the petty and unrelenting nature of the Judges themselves. They will go to amazing lengths to punish the lightest of crimes. Three links.