With Milligan distracted Stateside, it took a while to get the gang back together for the 3rd series of Bad Company. What we got wasn’t quite what was expected and a further shift from the common or garden war story.

Down Amongst The Dead Men

“The Krool Heart” was a natural end to the series. Seemingly a very final natural end. If your central charcater has become a near deity and the most powerful being in the universe, haven’t you painted yourself into a corner?

Almost five years real time after “The Krool Heart”, the series returned in colour with “Kano”. The commander of Bad Company peacefully residing in a human settlement on a planet with his wife and son. The planet “looks after” the people who live there. The planet has many quirks including time running backward for an hour at noon and the presence of solid, living breathing, human like “ghosts” that have a link to the past of the person they “haunt”.

Following a series of mysterious deaths, long dead Thrax from the original series appears to Kano, cajoling him out of retirement, spurring him into action to end the murders.

Frankenstein division, a group of human test subjects hideously deformed after experimentation, are responsible for the deaths.

The experiments twisting their minds as well as their bodies, Frankenstein Divison stalk the colony butchering the colonists. Kano raises Bad Company once again to defend the settlement.

Kano’s idyllic life is torn apart when he finds that his family are merely the ghosts of the wife and child he left on Earth, generated by the planet to give him the peace it thought he sought.

Similarly, Bad Company are ghosts, created to “save” Kano and to save teh settlement from the onslaught of Frankenstein Divison.

“Kano”  is hard to categorise. It’s a supernatural/surrealist drama, rather than a straight ahead war story..Slower paced and more studied than any of the previous offerings, visceral thrills were few and far between. It  has an odd, unsettling feel about it. Milligan continues with the metaphysical themes he had begun in the previous two series, whilst Ewins and McCarthy’s art had evolved. Ewins’ had moved into his less detailed phase, limbs were odd angles, body shapes awkward, everything a little more abstract. Ewins’ lurid colouring gave the art a dreamlike quality.

“Kano”  was intended as a reboot, and should have been followed by more  series soon after. But it wasn’t to be, Milligan had a brief sojourn in Hollywood, and sadly, Ewins’ health had begun to deterioate, the momentum was lost.

Down Amongst The Dead Men & Saving Private Franks

Bad Company nevertheless returned 9 years later in Prog 2001 for a one off entitled “Down Amongst The Dead Men”, serving as a brief reintroduction to the Bad Company universe and a prologue to the story proper. 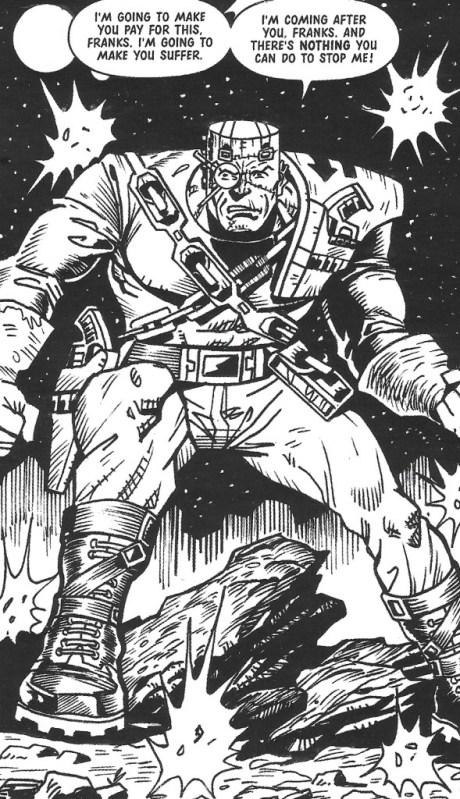 Kano is wandering from settlement to settlement, bored and listless, living a “zombie life” with no purpose. 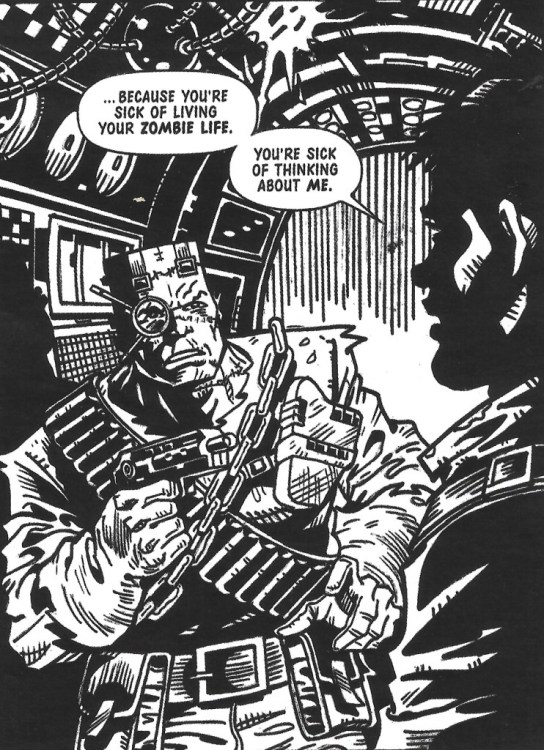 Flying through the asteroid field that was Arrarat, Kano has an epiphany, and knows he must kill the Krool Heart, Danny Franks.

A year later, the lazily  titled “Saving Private Franks” began. Kano and a team of dropouts and freaks (not called Bad Company) to destroy the Krool Heart.

In the ensuing battle, Kano’s recruits are picked off. Kano successfully recaches his objective, but rather than killing him, he rescues Danny from his life as the Krool Heart. 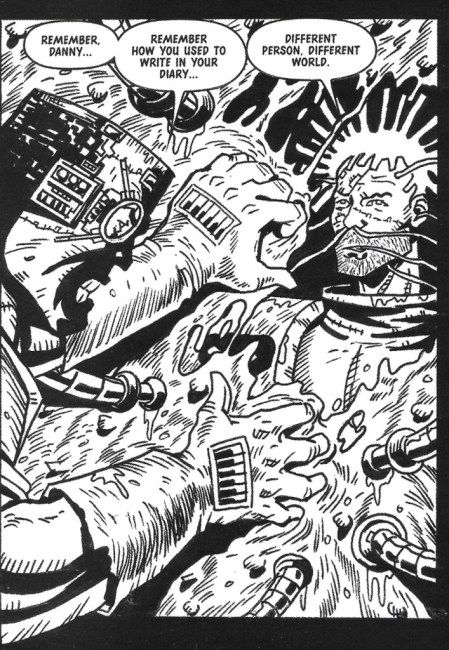 Danny then takes up the story, as Kano holds the Krool off while Danny and the remaining earthers escape. Franks’ last sight of Kano, was of his commander slaughtering swarms of Krool.

Whereas previously Milligan struck new ground in the portrayal of war and its psychological effects in comics he began to wheel out every cliche, the subtlety, nuance and allegory in previous series was abandoned. The plot was illogical,  contrived and doesn’t “feel” like Bad Company. The art returned to B&W. The line work was heavier and the pages felt claustrophobic. Sadly,  Brett Ewins was in ill health, and it would be his last work on the series and for 2000AD. He died in 2015.

“Saving Danny Franks” undid everything that “Bad Company” (series one), “The Bewilderness” and “The Krool Heart” had built in making a thought provoking and original series of science fiction war stories. The intriguing character development of Franks and Kano had been reset in preparation for future sequels.

Those sequels would be a long time coming, and would see a new artist come on board and a shift in tone.

Where to read it: