Nemesis The Warlock : The Latter Heresies

Nemesis The Warlock : The Latter Heresies

In Volume 1, “The Early Heresies” we left Nemesis, oddly chipper for a guy who had just received news that his wife and child had been murdered by Terminators, as the saviour of the Gothic homeworld and getting his revenge; Torquemada was dead at the hands of his own fanatics. Where could the strip go now?

Set ten years after the events of the Gothic Empire, this collects the second act of the saga, where Thoth, Nemesis’ not actually dead son, Thoth, returns to resolve some Daddy issues and exact a rather convoluted revenge on the man who ordered the death of his Mother.

The volume collects books 4 “The Vengeance of Thoth”, 5 “Torquemurder” and 6 “The Two Torquemadas”, plus the interlude / prologue to the latter half of the saga that is “Torquemada the God” and a bunch of other bits and bobs such as the Nemesis and Torquemada games from Diceman, photo strips and one offs from various annuals, specials and the Prog itself.

Across the volume we see Torquemada plucked from the past by Thoth,  thrust into the present to be endlessly tortured and subsequently used as bait by Nemesis to entice his revenge driven son into the open (Book 4 “ Vengeance of Thoth”).

This swiftly moves to Thoth being pursued through the time wastes by the motley crew of Nemesis, Torquemada and the ABC Warriors (Book 5 “Torquemurder”).

There  is  brief “lull” in the Kevin O’Neill illustrated “Torquemada the God” which cues up the next sequence with a glimpse into Torque’s new domestic arrangements, 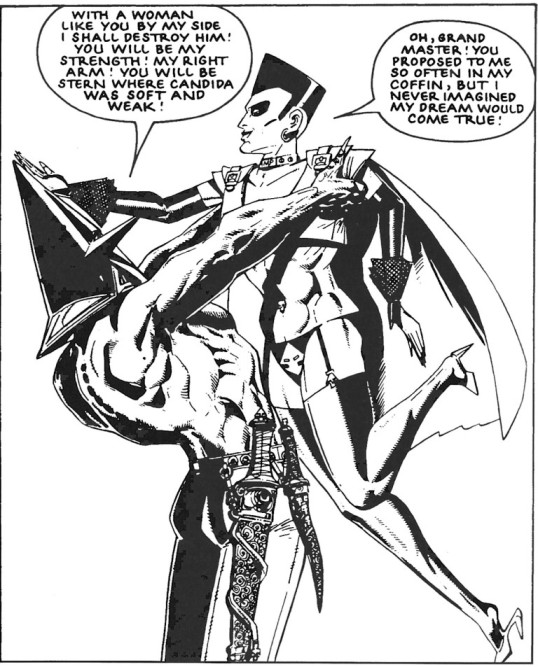 whilst the final book illustrated by John Hicklenton, sees the far future Torquemada meeting his first incarnation, the leader of the Spanish inquisition Tomas De Torquemada (“The Two Torquemadas”).

You can argue that the logic in the strip fails as in any time travel story, e.g. why doesn’t Nemesis just go back in time to just before Thoth kidnaps Torquemada in the timeline to stop any of this happening. Alternatively, you could just ignore all that tosh, don’t think about it too much and just enjoy the ride.

This, the middle period of “Nemesis”, is where the strip starts to start to sag. That’s not to say that these stories are bad, but from here on in the strip begins to lose direction and it seems Uncle Pat wasn’t quite sure how to wrap things up. But we’re getting ahead of ourselves.

What is undeniable is the quality of the art. From the sublime Kev’ O’Neill drawn strips, Bryan Talbot’s gothic majesty and his killer double page spreads to Hicklenton’s unhinged and grotesque genius. The Diceman strips are an interesting curio, and you get some cracking O’Neill and Talbot art to illustrate them. If there are drawbacks, the running order of strips is a bit off and the ridiculous, incongruous and painful to read photo strips maybe a necessary inclusion for the completes point of view, but add nothing to the saga. Finally, for such an impressively produced volume it seems a bit of a cop out to use reprinted creator commentary.

Volume 1, “The Early Heresies” was meant to be a “limited edition”, but clearly it sold in sufficient numbers for it to be reprinted, alongside this Volume,  presumably Volume 3 isn’t that far away.  The Titan reproductions are still the best, even with their Orson Cart  (he falls apart)  binding, but these hardback volumes are a big step up from the soft cover phone books that Rebellion also hawk. The “Heresy” editions have better quality paper and clearer reproduction than the occasionally smudged and murky reprint in the soft cover volumes, they are also bigger than the phone books, Prog’ sized, and have that mark of class – the book ribbon. I love me a book ribbon. Do yourself a favour; sacrifice a few trees and get a copy of this (if there are any still available of course)

it’ll look lovely on your bookshelf. It’s a super attractive format and one they should really consider for other classic strips.

Nemesis The Warlock :  A Potted History