Issue 2 of the UK comics anthology, inspired by the comics of our youth. Can Team ’77 repeat the success of issue 1 or is this a classic case of second album syndrome? 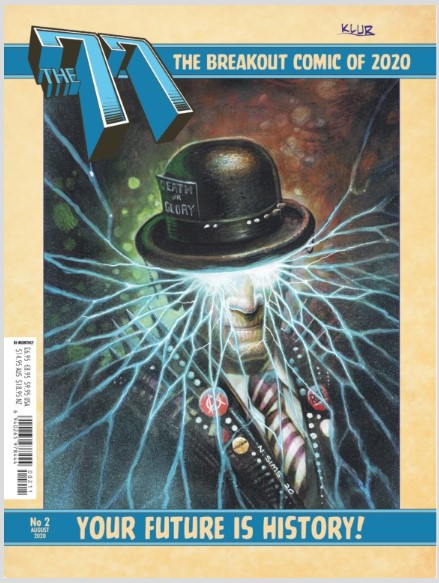 END_OF_DOCUMENT_TOKEN_TO_BE_REPLACED

It’s amazing that the Meg’ is still here after all the tribulations since its debut in 1990. It’s far more consistent than it’s older sibling. Overcome with enthusiasm this week for publications from the House of Tharg, managing something twice in a weekend for the first time since his thirties, Luke rambles for a few hundred words on this special anniversary issue.

END_OF_DOCUMENT_TOKEN_TO_BE_REPLACED

Luke & partner in crime head across the Severn Bridge to geek out for the day and empty their bank accounts at a convention that is tailor made.

END_OF_DOCUMENT_TOKEN_TO_BE_REPLACED

Part 1 can be found here :
https://2000ad.wordpress.com/2014/06/29/robo-hunter-a-potted-history-part-1
Sometimes, something’s should really be left to rest. Perhaps Sam is one.
Sam was resurrected for prog 723 2000ad’s first all colour prog’. Wagner, Grant and Gibson had been replaced by upcoming Scottish firebrand (and now international comic superstar) Mark Millar, art was supplied by Jose Casanovas. Millar’s Sam was young, rejuvenated (literally) and back in the city, previous continuity was “overlooked”. 2000ad was rebooting a few of its classic characters and strips around this period, notably “Strontium Dogs”. Largely, these reboots didn’t work and Robo Hunter was no exception.

Both Millar and his one time mentor Grant Morrison (now famed for their enmity) didn’t “get” the classic 200ad characters. Their interpretation of Dredd, Millar’s solo (?) “Robo Hunter” and “Rogue Trooper” are characterised by cliched 80’s action flick dialogue, extreme violence, hackneyed villains and plots that define the term “simplistic”. A bit of a shame really, I really like their other stuff. Interviewed for “Thrillpower Overload”, John Wagner said that after he saw the strip in the comic he requested editorial not publish any new stories, but to no avail, whilst Alan Grant offers this assessment:
“My objection arose when I saw the abomination produced. It was early in Mark’s career, so I guess he should get the benefit of the doubt – but that doesn’t stop it being a pile of crap”.
Millar led Sam on an extended arc that ended back on Verdus. He brought Cutie back, made her Mrs. Slade and turned her into a murderess. The strip wasn’t a success. A new writer will always bring their spin on a character, but this was throwing the baby out with the bath water. Millar replaces the wit and verve of the Grant, Wagner and Gibson stories with crude jokes, clumsy nods to contemporary culture (which has become his stock in trade) and poor attempts at parody. The strip lost it’s elements of farce and all of its subtlety. The only salve for the third degree burns that Millar’s run inflicted on the strip is by some rather spiffy art from Casanovas (and Jnr) and the underrated Anthony Williams.

After the end of “Return to Verdus” arc, Ron Smith and Simon Jacob (who was born to draw robots) took over for a few strips, Millar moved onto other things and Sam was put out to pasture again.

Next to pull Sam out of retirement were script droid and former editorial droid Peter Hogan with design ‘bot Rian Hughes who brought his distinctive retro style to the art. Hogan and Hughes’s was a bit more like the classic Wagner/Grant / Gibson run, but heavy on the twee and bland. Hogan’s characterisation of Sam dispensed with the world weary cynicism, satire and became gentler. Hughes’s retro pastel coloured art lends itself to quirky or dialogue heavy strips (“Dare” is brilliant and I recommend his “Yesterday’s Tomorrow’s collection”), but not to action. In the new creative teams debut on the strip Sam was drawn with an inane grin and wearing his cap sideways like some chav hanging around the local offie on a summer evening . The humour became less barbed, the strip more akin to a strip for under 12s rather than a sophisticated science fiction/fantasy comic.

Hughes tightened up on his interpretation of Sam, but to no avail. Simon Jacob steps in for a few strips, but Sam was put back on the shelf.
A few years later Alan Grant and Ian Gibson returned to the strip and dust off Sam, or rather his head did. The next Robo Hunter run starred Samantha Slade, Sam’s granddaughter was trying her way in the family business, guided by the preserved head of Grandpa. Samantha was sassy, sexy and even occasionally funny (helped out by some fantastic art from Gibson). Hoagy and Stogie returned to help out Grandpa’s girl, but Sam was relegated to supporting character.

Fun though it was, this was pretty lightweight and clearly didn’t set the world alight. Gibson left before the strip ended didn’t finish the last strip, leaving perennial pinchhitter penciller Anthony Williams to complete it.

The latest resurrection was slipped in with little fanfare in the Sci Fi Special. Alec Worley has got a better grip on the character and the humour better than Hogan or Millar, the wacky humour and satire are present in equal measures. Marc Simmons provides a clutch of easter eggs and references to past creators and runs and most importantly he draws great robots, pretty important in a strip that revolves around them echoing but not slavishly copying Gibson.

Not a classic, but a good start for any revival, it’s certainly better than the last few revivals.
It’s been a long time since any of Sam’s adventures have been essential. As much as I love reading Sam, perhaps he should retire permanently. I’ve ranted about this before:
https://2000ad.wordpress.com/2013/01/18/i-know-its-over-or-always-leave-them-wanting-more/
Perhaps Worley and Simmons can do what other teams haven’t been able to do and return Sam to greatness. I’d be happy to be proved wrong.

The last time I did a potted history of a revived character, its series ended unexpectedly. Sorry IDW, sorry Rogue, for what it’s worth –that was the best version of the GI for years. Hopefully, this won’t have the same effect, I could get a reputation.
The re-appearance of Sam Slade in the previously thought extinct Sci Fi special is worthy of milking an article for the blog’, and to demonstrate that articles like this aren’t the kiss of death for otherwise promising series (that’s the plan anyway).
Sam is one of the oldest characters in 2000ad. Created by John Wagner, the early episodes had art duties divided between Jose Ferrer (known for some “Starblazers”), but along the way there have been a number of “misguided” (if I am being polite) revivals, and varied creative teams.

Robohunters are one of the few occupations left remaining for humans in a world where even armchairs have artificial intelligence. At the beginning of the run, Sam is old, very bitter and very cynical. Coming to the end of his career, he’s waiting for the day when he’ll be just that little too slow and a robot to be just that little too quick.

Sam is approached by Rogers and Chan, two representatives from the International Space Commission to solve a little problem they have on a planet settled and developed by robots in preparation for human settlers. A planet called Verdus.

With obnoxious, arrogant and all round conceited arse, pilot Jim Kidd and Sam’s loyal (and loveable) robometer Cutie, Sam travels to Verdus. A shield “accident” sees both Sam and Kidd age regress by 30 years, making Sam fit, young and capable (theoretically) of facing the travails ahead of him, Kidd on the other hand has reverted to a baby, admittedly an obnoxious, arrogant and all round conceited arse of a baby.

Sam, Kidd and Cutie find that things have gone badly wrong on the planet. The robots have succeeded in terraforming the planet but they have become so advanced that they don’t believe that Sam and Kidd are humans at all, but simulated humans. From here on in, it all goes a bit wrong. Sam escapes, finds the one robot who can confirm he is a human and presents his case to the robot parliament (where Wagner gives government a good shoeing) the robots can’t agree on whether Sam is human or not, so they deal with it the only way they know how – by starting a civil war and Cutie dies saving Sam from execution.

The run is interrupted during the merger with Tornado between prog 82 to prog 100. Despite everything, robots and editorial dictat included, Sam completes his mission, though perhaps not in the way the intergalactic crime commission expected, or hoped.
Verdus sets the tone for the rest of what is the “classic run”. Robo Hunter takes its inspiration from the great gumshoe detective characters, like Sam Spade (duh) in the internal monologue, but the humour is almost Python-esque, particularly in the opening storyline. The humour is more sophisticated than its contemporaries. Wagner had seen the potential for satire and black humour in the still relatively young comic, which was still finding its feet.

Sam then took a break, and reappeared in “The Day Of The Droids”. Politicians are being replaced by androids, Sam is charged with finding out why. Framed, Sam is imprisoned with the rest of the city’s robo hunters, he finds out there is a conspiracy to take over the city by the “God Droid”. The “Day of The Droids” continues the tone set by “Verdus”. Wagner has a ball, Sam meets the AAU (Amalgamated Androids Union) run by the drinks droid Brother Molotov, meets 3 robot Slades, appears in a mek version of “Flesh” and most significantly meets his new assistants, Hoagy the dumbest robot in the world, and his loyal cigar, Carlos Sanchez Robostogie. Sam again wins the day, but it is a pyrrhic victory, the price of AAU assistance in defeating the robot mafia led coup is to ban Robohunters. Sam is unemployed and unemployable, and sets off to Brit Cit to start again.

The Brit Cit is characterised by far shorter stories, starting with “The Beast of Blackheart Manor“, it also sees the arrival of Alan Grant as co scripter and occasional sole scripter (at least according to the credits). The stories become wackier and sillier, the harder edge has dulled, but the quality doesn’t drop. Highlights are the “Killing of Kidd” seeing the return of Sam’s infant pilot from the Verdus mission; “The Filby Case” with the world’s first telepathic robot; “Play It Again, Sam” where a very familiar robotic female Prime Minister announces national song year, a good portion of the script is in song (a favourite Wagner/Grant trope)and finally, a personal favourite – “Football Crazy” which features quite possibly the largest collection of racial stereotypes in a single comic strip, ever. “Blakee Pentax” became an in-joke between my brother and I for years.

Wagner, Grant and Gibson started to wind the strip up. Sam was killed, brought back into a previously unknown clone body and in the process of tracking down his killer, caught a thief who had stolen priceless treasures and historical artefacts. Sam received a hefty reward and was set for life, he hung up his robo hunting duds and retired.

Of course, idiot assistants weren’t happy with this. They hatched a plot to get Sam back in the saddle. A fat, grumpy Sam was seen disappearing beneath the waves on a submersible health farm run by Dr. Droid.

A now lean, but elderly, Sam, returned to find all his money and assets had gone. With the dregs of his cash reserves he sets off to track down Hoagy and Stogie. Sam catches up with his idiot assistants at his office where Rogers and Chan had given Sam the Verdus mission. Penniless but pensionable, Sam has no option but to pick up where he left off, and restart his robo hunting career.

And that’s where Wagner, Grant & Gibson leave him.

What came next was controversial, to put it mildly.