In lockdown, Luke though he’d read more. But what he’s done is bought more to read, leaving him with a teetering, potentially cat flattening tower of books and comics next to the bed. In amongst that, he’s drawn out this new(er) edition of the Dredd classic. 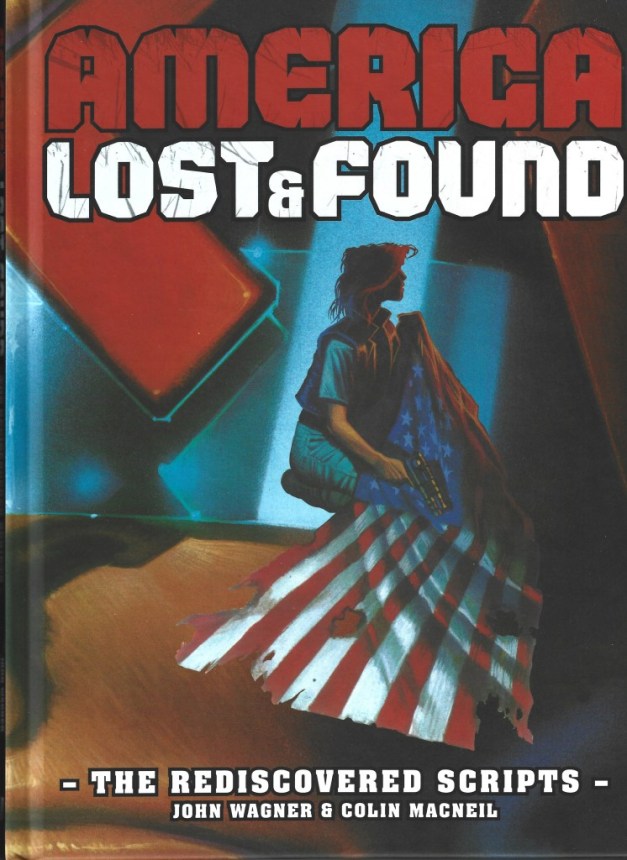 END_OF_DOCUMENT_TOKEN_TO_BE_REPLACED

Word on the new latest Sci Fi special was that it was mainly reprint. That’s not a million miles from the truth, but there are also some shiny new gems in amongst the family jewels. WARNING : spoilers 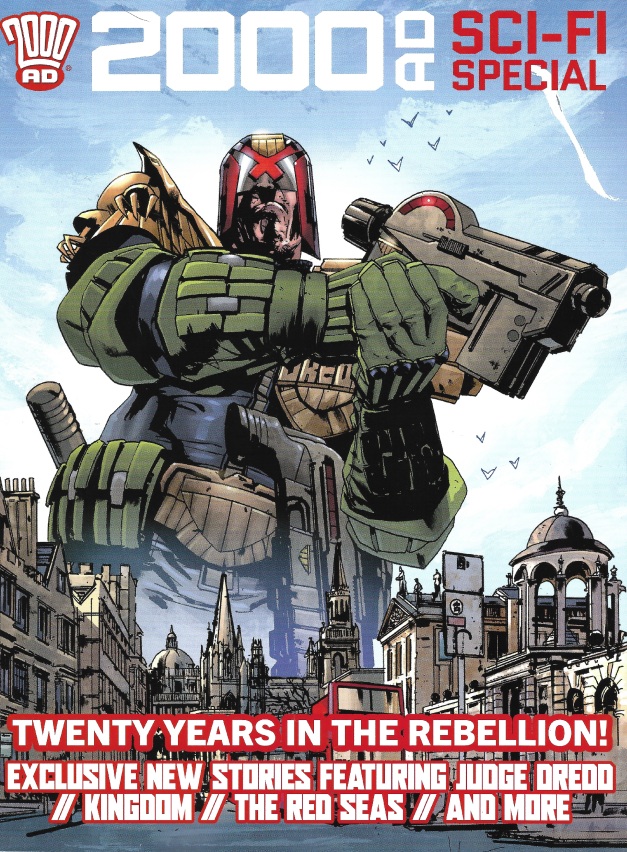 “Twenty Years In The Rebellion”

It is hard to believe that it has been 20 years since Rebellion took over “stewardship” of the Galaxy’s Greatest and the Meg’. Love them or loathe them, it’s a pretty safe bet that if it wasn’t for them, we would be talking about 2000AD and it’s sister mag’ in the past tense. To celebrate, Tharg has drawn together a package that celebrates the china anniversary of marriage of Rebellion and the Prog’.

Behind an imposing Jock & Chris Blythe Dredd cover is a mix of reprints of some of the best one offs from the Rebellion era, new strips featuring characters from both eras and editorial features. 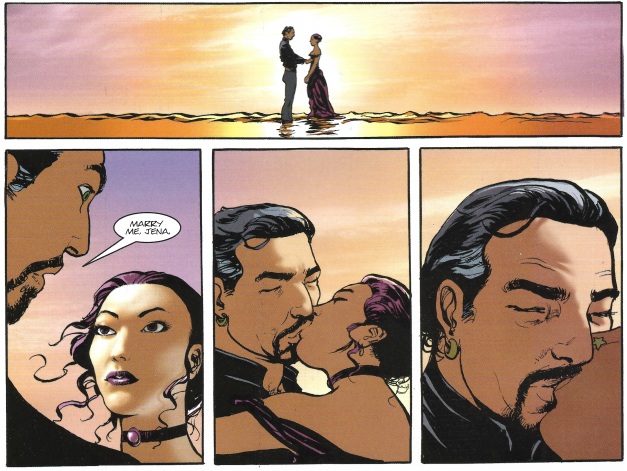 Dredd universe representation comes from a reprint of the “Judge Fear” episode of the disturbing “Dreams of Deadworld” by Kek W and Dave Kendall and a masterful Wagner and Ezquerra Dredd, as Joe hands over the keys to his Rowdy Yates gaff to his clone, Rico. 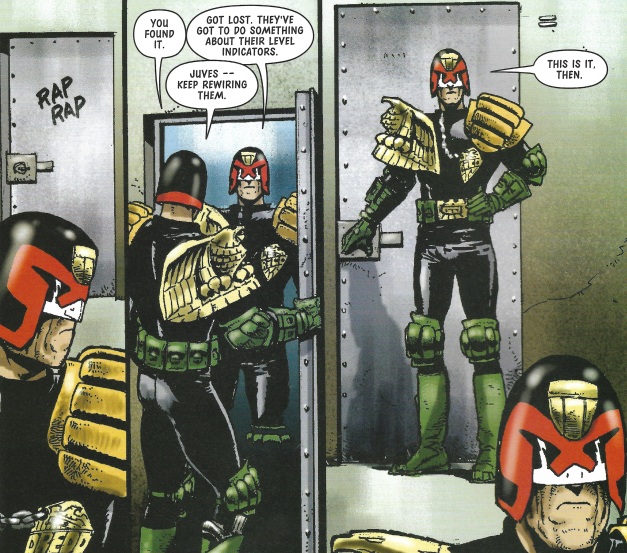 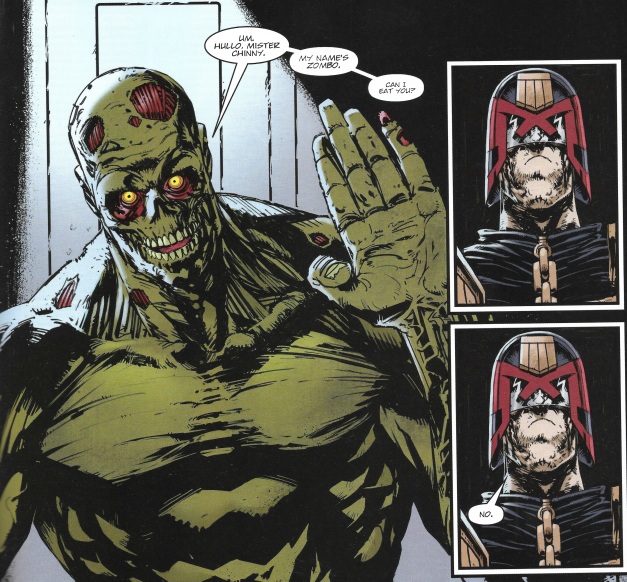 Dan Abnett and Richard Elson’s “Kingdom” comes out of retirement and guest stars the only ursus maritimus on the CIA death list. 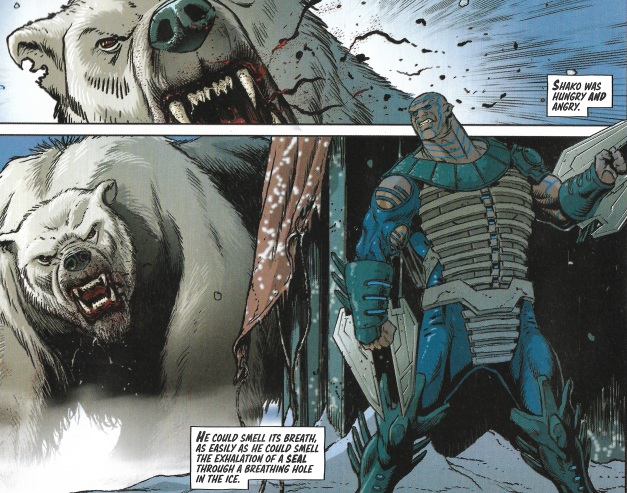 John Reppion and Clint Langley goes all 90s style as they transfer  “Storm Warning” from the Meg’ with a gate crashing (not to mention slightly incongruous) “Blackhawk”. 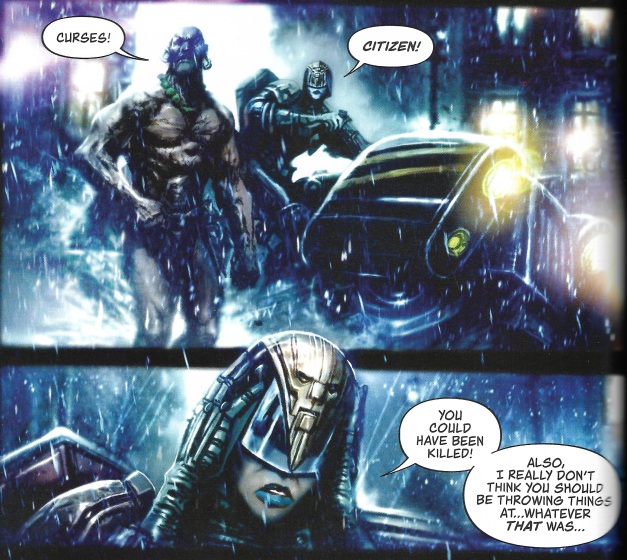 Finally, Ian Edgington and Steve Yeowell serve up “Red Seas” vs “Ant Wars”, the mash up literally no one asked for, but that’s fun all the same.

The customary (and cost reducing) text features and pin ups round the package off.  Eveyrone loves a list and Karl Stock provides his best 20 strips from the last 20 years, provoking debate and fanboy hate on the socials and the forum. Rebellion supremo Jason Kinglsey is interviewed and so new they are still under warranty (yes, okay they have been around a few years now) art droids Dan “why isn’t he in the prog more often” Cornwell and Stewart Kenneth Moore providing a Dredd pin up and multi character DPS respectively, John Charles efficaiously colouring Cornwell’s work.

It is mainly reprint, but it’s brilliant reprint and the new material is worth admission. A little eye watering at £7.99 for those of us who still baulk at paying over £4 for a comic, but it’s an impressive package (fnar). 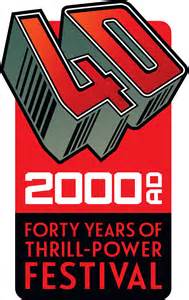 Seth unpacks, takes stock and counts the pennies after a whirlwind weekend of thrillpower.

END_OF_DOCUMENT_TOKEN_TO_BE_REPLACED

Volume 2 of the series, collecting “Queen of the Zombies” and “A Murder of Angels”, dropping us right in the middle of an intensifying reek (zombie) war. Titus Defoe and his “Dirty Dozenne” are up against it. On the trail of “Mene Tekel” and the titular “Queen of the Zombies “ La Voison.
La Voison is traced to Nonsuch House, home to the British Secret Service and the headquarters of the Royal Resurrection Company, at a gathering for the gentry and the British Secret Service. With “Damned” Jones in tow, Defoe crashes the party but reckons without the power of La Voison to control the part-reek clockpunk servants of the house. Defoe and crew have a battle on their hands, and not without loss, as one of their number turns reek, and there’s discord and division in the ranks. Soon the action moves to the Tower of London, under siege from an army of Reeks, there is a traitor in our heroes’ midst, heavenly forces take an interest and the identity of Mene Tekel is revealed.
And there’s a massive crocodile.
Leigh Gallagher is the punk rock Bernie Wrightson. Unfashionable with the number of panels per page, dripping in atmosphere, black and white, with an emphasis on the black, shading applied via pepper pot, intricate, gory, grotesque, a master class in cross hatching. Backgrounds, character and weapon design out of the sketch book of Bosch (Hieronymous, not power tools). Mills introduces the concept of “clockpunk” as a precursor to steampunk, which means Gallagher has a whale of a time designing bizarre and outlandish weapons and vehicles. The clockpunks created by Robert Hooke draw inspiration from JF Sebasatian’s android companions in Blade Runner, and in turn Hans Christian Andersen. Unnatural, eerie and sinister. Absolute genius.
Mills’s script occasionally stalls as he stands on his soapbox, but this is witty, very funny in places. It does tend to jump around a bit but there are ideas a plenty. With each page Mills comes up with something inventive or outlandish, he’s having a ball, more so than any of his other recent work.
There are the usual Mills targets: “the Vizards” the superheroes of the 17th century are treated contemptuously by our hero and the customary class commentary and savaging of the upper classes. He deploys historical figures inventively and creates imaginative alternative technologies . The action doesn’t let up from page 1, with the pulpy feel of a puritan “From Dusk Till Dawn”.
In short, it’s fab’. Buy it.