The Law In Order: Anatomy Of A Crime

Life in the Big Meg can be tough, but when you throw in unemployment, inbred stupidity and an expanding waistline the situation becomes as difficult as say… living in Newcastle. Fortunately the future metropolis has a man who is looking out for the citizens and will guide them back to the path of righteousness should they stray. Or blow their kneecaps off. It will be one of those two. 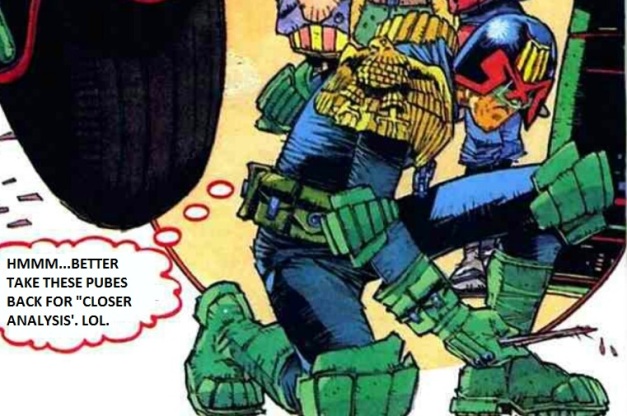 WHO’S RESPONSIBLE?:
John Wagner examines the plight of the average Joe Cit while Mick McMahon gets to do some iconic stuff.

WHAT’S IT ALL ABOUT (IN ONE SENTENCE)?:
An aspiring fatty has his dreams dashed by Dredd.

CANON FODDER?:
A Police wagon takes away the perp.

WHAT’S THE ART LIKE?:
Vivid colours and designs throw this into a stunning light as McMahon was at his peak here. A weird highlight is the citizens walking past Robert Morley block when Dredd spots his quarry. One is holding a gun while another has what appears to be a mutant bird on a leash. Best of all is the iconic panel of Dredd firing from his jumping bike. This would later be used multiple times by other artists in homage.

HOW MANY LINKS?:
Overall this is a simple tale of even simpler but bored citizen putting on weight for something to do. Sure, that happens every day in Wigan but what sets this aside is the frustrations of one citizen leading to a sequence of events from which there is no hiding place. It is also nice to see the Tek Judges piecing the clues together CSI style, only without the wanky music. We do get a wanky punchline, though. Four links.