The Law In Order: The Weather Man

Music is a universal tool for the betterment of humanity, bringing us closer together as a species and instilling in us the myriad emotions the composer wishes to convey. Unless it is anything by the band Scouting For Girls, in which case it will provoke only homicidal rage. Carl Heinz Clayderman has the same wish to unite the masses, but this time it is in death… 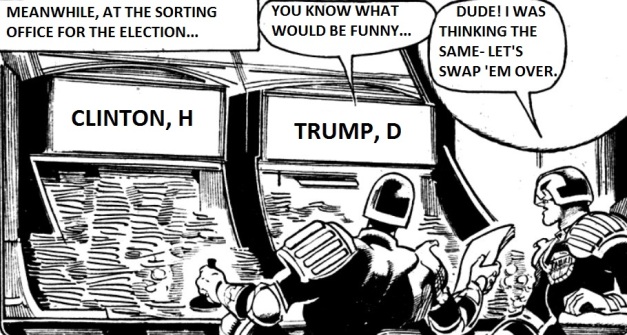 WHO’S RESPONSIBLE?:
John Wagner and Alan Grant get the band back together and Ron Smith goes apocalyptic.

WHAT’S IT ALL ABOUT (IN ONE SENTENCE)?:
A composer displays his latest work.

WHO’S THAT IN THE HELMET?:
Judges Denny and Gwyn are assigned to crowd control. Gwyn is killed by lightning and Denny is knocked out after accidentally killing a saxophonist. Still, he probably fucking deserved it.

IT’S CULTURAL, INNIT?:
Clayderman is presumably named for the famously cheesy French pianist.
His first names may also be a nod to Karlheinz Stockhausen, the great German composer.

ANY LAW LORE?:
Rooting out the troublemakers is the only policy in crowd control.

WHAT THE DROKK?:
Though flooding the auditorium and creating lightning bolts is possible, how could Clayderman create a volcanic eruption and earthquake? These aren’t weather related in any case.

WHAT’S THE ART LIKE?:
The weather-related death counter on the news broadcast is hilarious and Smith does a good job throughout. Denny upside down in the air reminded me of Charlie Brown getting bowled over.

HOW MANY LINKS?:
Worth it alone for the name of PITS Clayderman but the craziness of the symphony and the escalation of events is deliciously bonkers. Three links.