The Law In Order: The Haunting Of Sector House Nine

Remember that televisual shitfest Most Haunted? Well imagine if it was all totally real and not just Derek Acorah putting on badly contrived voices or Yvette Fielding slyly lobbing stones out of her handbag to sucker the camera crew. Now imagine if it were set in the futuristic cop shop and with zombies thrown in for good measure. Fuck, yeah. I would watch the shit out of that. Right, who is producing this Mega City One TV show? Get them on the phone… 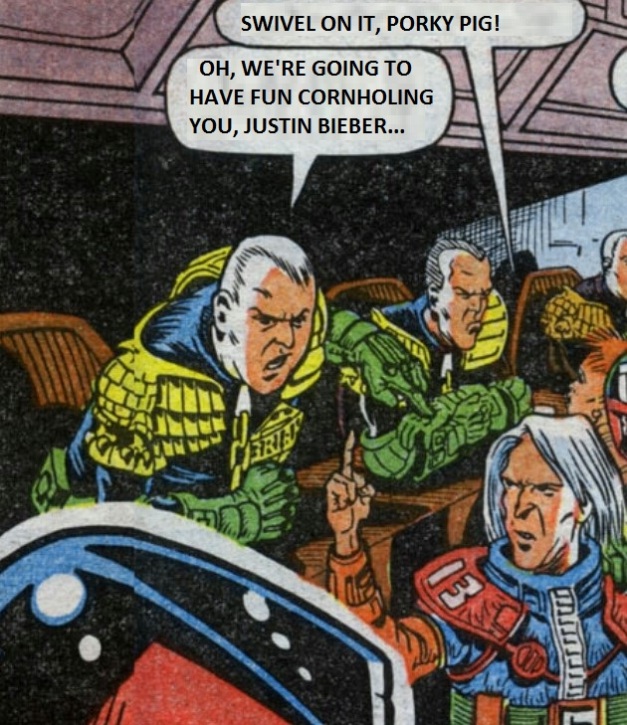 WHO’S RESPONSIBLE?:
John Wagner and Alan Grant tell us ghost stories while Brett Ewins gets their willies put up him. Wait…

WHAT’S IT ALL ABOUT (IN ONE SENTENCE)?:

WHO’S THAT IN THE HELMET?:
Judge Riley is about to arrest a citizen with an asshole roboterrier.
Judge Patel assists Dredd.
Judge Flint and his awesome white tache are at Sector Control.
Judge Mapleson is questioning a suspect when shit starts flying. He has a goatee so probably deserved injury.
Judge Amcor is crushed by a wall and later throws himself from the windows to escape a fire.
Judge Drucker is also crushed by a wall but reanimates in the morgue and kills a couple of Judges.
The indomitable Judge Huss holds his shit together when the dead reanimate in the morgue. I’d have crapped my pants.
Psi Chief Omar is the head of Psi Dive and is kitted out with a turban, earring and goatee.
Judge Goober is told to take his perps over to Sector 10.
Judge Lewis is at Sector 9 Control when the spook figures out it is being deceived.
Judge Linvale is told to put his perps on hold.
Judge Lewis is at Sector House 9 when the ectoplasm hits the fan.
Judge Skirk is made to fill his Emphatically Yess pants when the spook bursts through his screen.
The creator wanky Judge Ewins is killed in the haunting.
Judge Berger is duped by Leroy Tamerlain to believe he has killed him.
Sector Chief Erikson commits suicide after being influenced by the spirit of Leroy Tamerlain.
Judge Brian is a Desk Judge at Sector House 9 being given the finger by a perp.
Psi Judge Geller is suckered into trying to combat the spook.

IT’S CULTURAL, INNIT?:
Gordon Banks was a world class English goalkeeper who pulled off the greatest save ever until Rene Higuita decided to try something radical.
Geller being a Psi might be a nod to then popular bullshit mentalist Uri Geller or assistant editor Simon Geller. Neither have psi powers.

ANY LAW LORE?:
Sector House 9 was only built 30 years ago and each Sector House has interrogation cubes, holding pens, med and forensic facilities.
Judges don’t commit suicide.
Judge Dredd is double zero rated for psychic sensitivity.
Judges are trained to have a near total recall of even the most trivial details.
Judges apparently carry crowbars on their bikes.
Leaving a perp unattended at a crime scene is against procedure. Dredd has done this lots.

CANON FODDER?:
Dredd has his Lawgiver in his left boot (as does Patel).
Geller’s knee and elbow pads are red and his shoulder pads are differently coloured too.

DAMAGE REPORT?:
Dredd gets a crushed helmet (fnarr) with presumably some concussion.

WHAT THE DROKK?:
The walkway across the middle of Sector House 9, though impressive, is a health and safety nightmare and what purpose would a hollow centred Sector House serve?
Dredd states that Judges don’t commit suicide yet there are many reported cases of this.
Dredd shoots from Geller’s right yet the bullets in the next panel seem to come from the left.
Tamerlian seemed to be able to do a lot for a man with a terminal bullet wound. He put the whammy on Berger, selected a citizen, got some poison, stuck the cit in the body bag and then headed off to a handily convenient psi amp.
How does the psi amp prolong Tamerlain’s physical body even after he was injured?

WHAT’S THE ART LIKE?:
Ewins nails the look of the Judges, weird citizens and supernatural occurrences. There’s even a nice circle panel for the Geordie. I love the Ewins design of the Lawgiver too as there is something meatier about it. The panel work is great and I especially loved the simplicity of the talking heads with badges. As with Ewins’ later style, there are some lazy panels in that some are replicated a number of times, particularly ones of Skirk and Berger. This is a neat trick to flesh it out but once you see it, it annoys. That said, the panel at the end of part 4 is phenomenal; iconic even.

HOW MANY LINKS?:
This starts with a brilliant look at the hectic life of a Sector House main hall and goes on from there, giving us an insight into the running of the place while having a genuinely creepy build up. I’m giving this an extra point for what could be the first instance of a raised middle finger in the prog. The pacing was just about perfect and the wrap up was neat, if a little contrived. Six links.